I love to shop, and I love to eat. I also love to make extra cash. And according to the description on this app, EasyShift should allow me to blend these together into a one-of-a-kind, amazing digital/cash-making experience!

But can you really make money with the EasyShift app? This was the question that I wanted to have answered, so here’s what I found when I started looking around.

I was in for more than a few surprises with EasyShift… but I’m nothing if not thorough.

Making Money With The EasyShift App

I needed to download it and try it out before I could make any sort of judgment call on it, and that is precisely what I did.

First of all, let’s take a look at the Google Play listing for the app. It’s a free Android app with over 100,000 downloads, and it also has a 3.0 rating. 3 stars isn’t terrible—but it’s not necessarily a good rating either.

Most apps that I’ve looked at that have been good have had a rating of over 3.5 stars… so right from the beginning, things didn’t look super great for EasyShift. 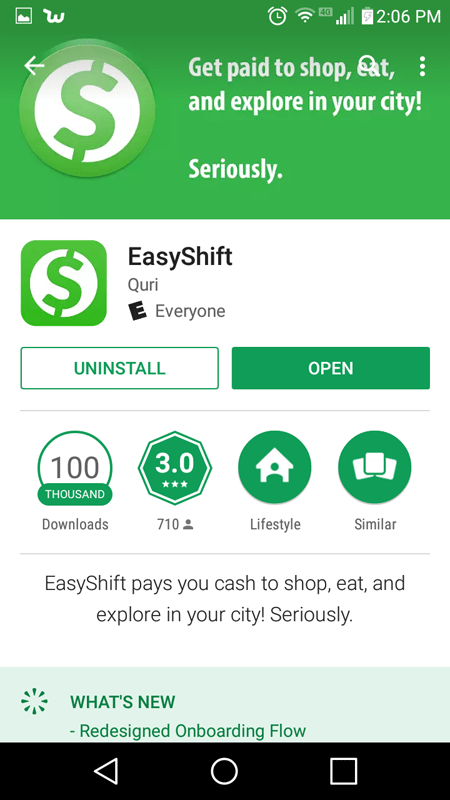 But I’m also not one to give up so quickly.

Here’s the tag line for the app in the Google Play Store….

“EasyShift pays you cash to shop, eat, and explore in your city! Seriously.”

Ok, I liked the sound of this. Here is a bit more about the app from the Read More section of the listing. 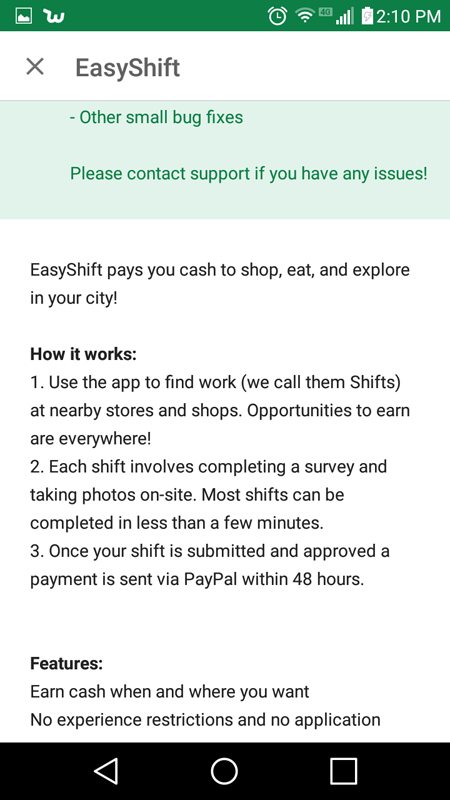 Here, you can see how the app works. I’ve reviewed apps like this before in the past… apps that wanted me to go on ‘missions’ to local stores and other businesses.

And I can say that I tend to have mixed feelings about them. Some of them have been really nice—and others have been a complete waste of time.

It was too early to tell with EasyShift thus-far, so I decided to open it up and try it out for myself. Here’s what I encountered.

Opening up the app brought me to this screen, where I was told that I could create an account. 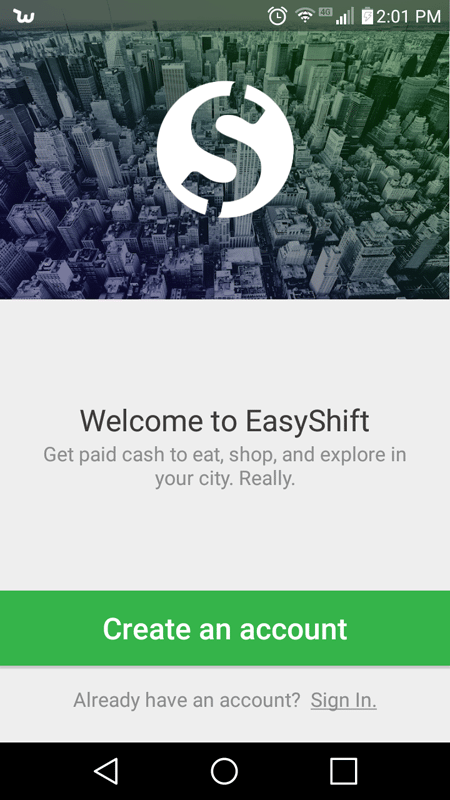 The first step was to fill in my phone number so that I could verify my phone. This took seconds, and involved me getting a text message with a code in it. Next, I needed to start creating the rest of my account. 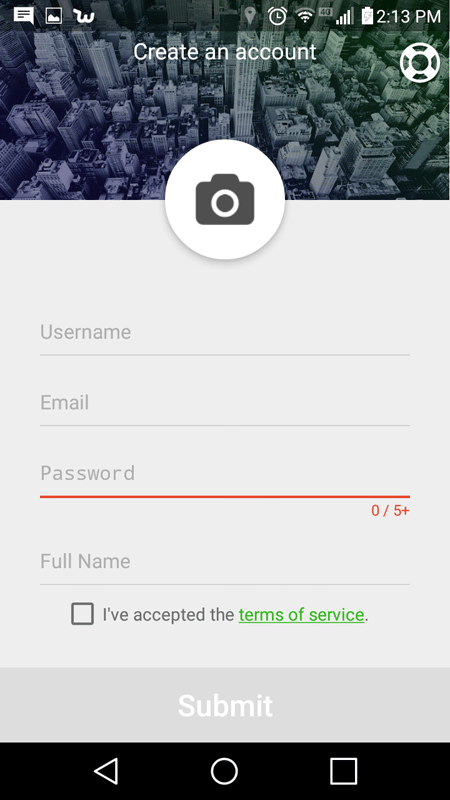 After filling all of this information in, I was taken to a screen with a map of my town, along with a dot that represented my position on it. There was a refresh button on the bottom right, and a drop down menu and ‘shifts’ button located at the top.

The shifts button turned out not to be a button, but rather, just a list, maybe, for how many shifts I had in my local area?

I was not surprised to find that I looked to have zero available… as I live in a small, rural town—but I was still curious about what was going on, so I decided to open up the drop-down menu and start taking a look around.

I didn’t find anything super-useful in the menu, so I returned to the map and started playing with it.

As it turned out, I could move the map around—which was a good thing. The map actually worked a lot like a Google Map, and it seemed to be pretty easy to access. I moved the map about an hour away to a much larger town, and found two different shifts that I could take part in.

Here is part of a screen-shot for one of them (minus the map, to hide the location of my top-secret bat cave). 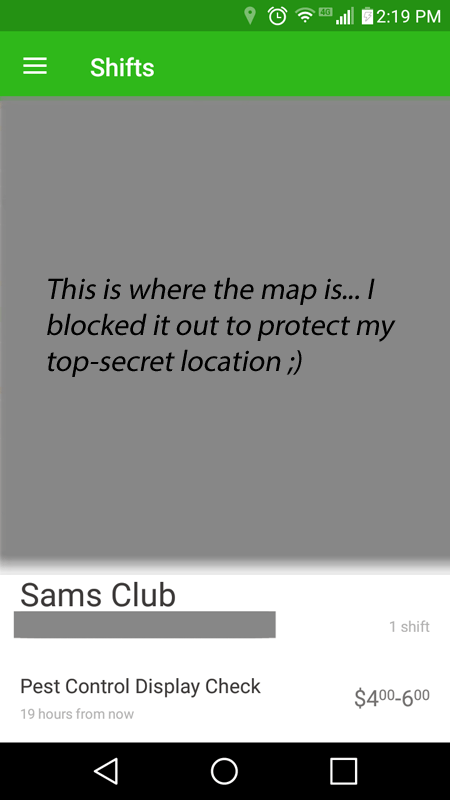 The shifts appear like round pins stuck into the map, and you click on them for information. I was surprised to find that this particular mission would pay $4-$6, which was awesome!

I clicked on it, and was taken to another page, which seemed to give me more information. Here’s what I found. 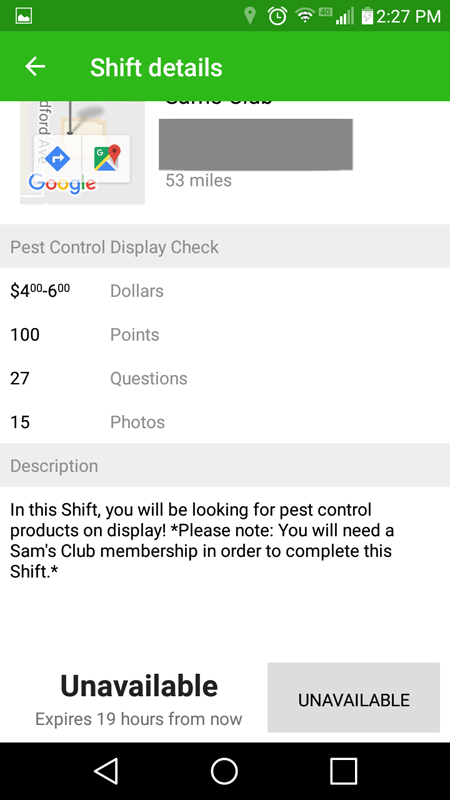 As you can see, this shift was a listing for Sam’s Club, and if I would have taken it, I would basically have had to do some looking around for pest control displays.

I would need to answer 27 questions, and take 15 photos—which doesn’t seem like a huge amount of work at first glance, though it is quite a bit when you compare it to the requirements for other similar apps in this category.

I’ve reviewed apps where I had to take one or two pictures, and answer like 15 questions… but I’ve never quite seen an app that asked for as much as this one.

But, on the flip-side, this app seemed to pay better for the work (but I will talk more about this a bit later on).

The shift was unavailable thus-far, but I think that was either because I was like an hour away from it, or because of the timing. I think, as the job got closer, it would become available? That was my theory, anyway.

In this larger town about an hour away from me, there were only 2 shifts available, that I could see. But that city still isn’t huge.

It’s not like a city the size of New York or Los Angeles. In cities that size, I could imagine that there would be many more opportunities to earn extra cash.

At this point, I felt that I had enough information to figure out if this app would be a good fit for me or not, but I also decided to take a look at the Google Play Reviews, just to see what I could find there. I felt that the 3 star rating the app had on Google Play warranted some attention, so that’s what I looked at next.

What Google Play Reviews Said About The App

Secondly, I also noticed that a lot of people complained about the number of pictures that you need to take on shifts. And for good reason. The shifts that I looked at did seem to require an unusually high number of pictures.

I have tested similar apps like this in the past, but those apps only required a picture or two during store-visits—not 15 or more!

Another common theme among reviewers was that people seemed to think that EasyShift didn’t pay enough for how long the shifts took.

They also seemed to complain a lot about how some shifts got rejected, when they had seemingly followed all of the rules. As it turns out, there are quite a few reasons for why the app has such a low Google Play Rating.

If you go to the Google Play store and read through some of the reviews, you will quickly notice these trends. You will also notice that the app has almost as many 1 star reviews as it does 5 star reviews…which is certainly not a good indication of anything, in any sense of the word.

EasyShift seems to work well functionally… but is it worth the time? Do they offer enough to make it worth your while?

Does EasyShift Offer Enough To Make It Worth Your While?

Personally, EasyShift did not make the cut for me. Even in the larger city an hour away from me, I only found two shifts, and though they did pay pretty well when you compare this app to other apps, the amount of effort that would be required to meet the requirements is indeed quite a lot.

Also, I feel like it would be hard to be able to count on getting regular shifts, as there just aren’t enough shifts shown around me to give me peace of mind on that front.

The app itself works very well, and everyone seems to agree that the company does a good job of paying out what it owes… but the questions and problems are these… can it provide enough work, and is the work worth the money when it’s available?

I must say that I have doubts on both of these fronts. If you lived in a larger city and could find a lot more shifts, then maybe this app would be worth a try for you.

But if you are like me and do not live in the middle of a greater metropolis, then I’m afraid that, like me, you are going to be disappointed with it.

I’ve got no hate for EasyShift… but it was just a bit too difficult to find the love in it for me. That’s why it will not be earning a permanent place in my phone app list.

Our Final Thoughts On The EasyShift App