This free Google Play Store offering seems to have a cool vibe to it… but can you really make money with the Showbox app?

We took a look at it on the Google Play Store, and were struck by the fact that it operates just a little bit differently than most other apps that claim to give you cash rewards. This game is said to give you rewards for game discovery.

Making Money With The Showbox App

So, first things first, Here’s what the description says in the READ MORE section of the Google Play Store…

The app has been downloaded over 1 million times, has a 4.2 star rating on the Google Play Store, and has been reviewed/rated by over 30,000 people. 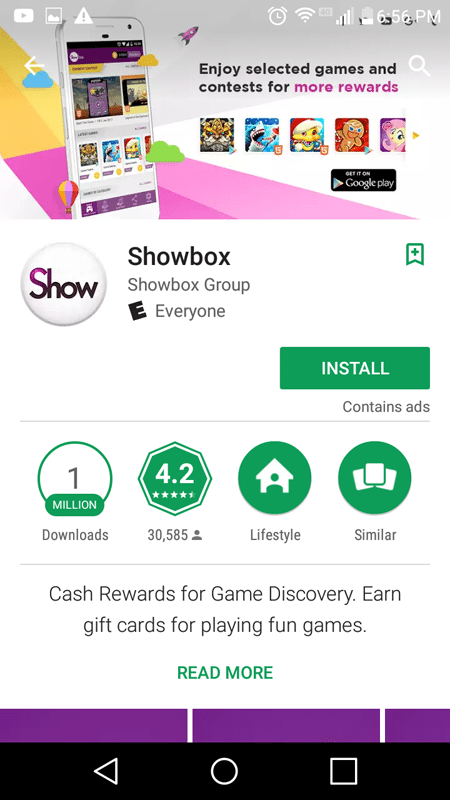 But can you earn awesome cash with it? Are the games fun? Is the app a pain to use—or is it actually fun?

These were all questions that we wanted to ask… so we downloaded the app for ourselves and decided to give it a try.

When we opened up Showbox, we were greeted with this opening screen. 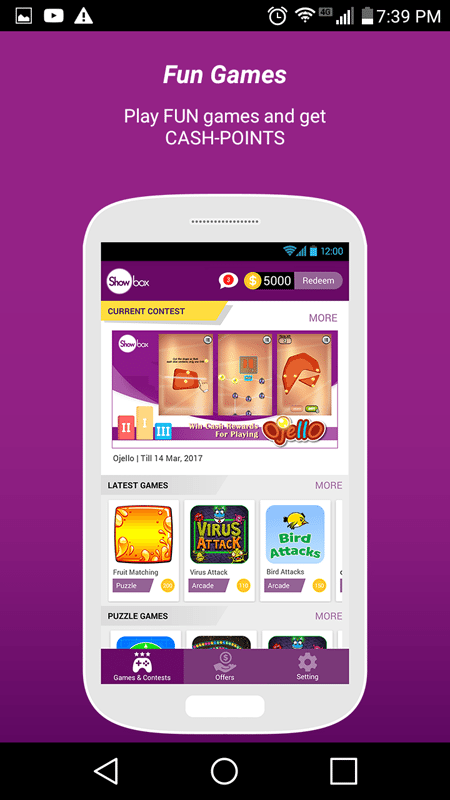 It was the first screen in a series of screens that told us a bit more about the app. Basically, these told us that Showbox consists of fun games that you can play to get Cash Points, and that you can easily redeem these points for actual cash, to pay your phone bill, or more.

Next, we were taken to the registration screen. 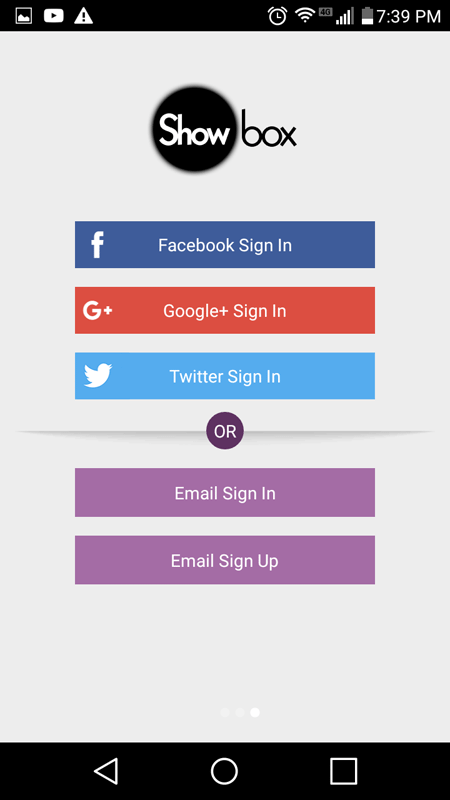 We chose to sign in with Facebook, as that is usually the simplest way to get started. Next, we were taken to this screen. 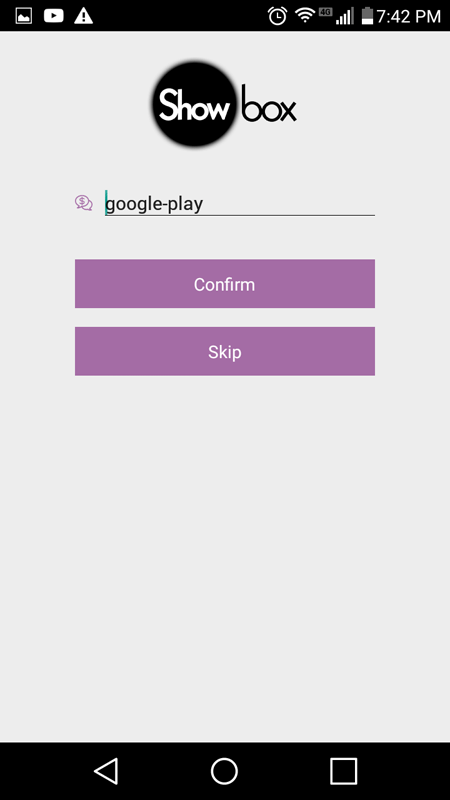 I’ll be honest—I wasn’t sure what this one meant. There was a little dialogue box with a $ sign in it, and Google Play had been filled into the space. Maybe this meant that I was choosing rewards as money in Google Play or something?

I wasn’t sure, but I was feeling adventurous… so I just clicked confirm (way to be spontaneous, right? YOLO!!!).

I was taken to a quick ‘what’s new’ screen next, where I read about some of the latest patches to the app. But after clicking through this, I was taken to what seemed to be the ‘hub’ of the app, though a pop-up window appeared not long after. It looked like this. 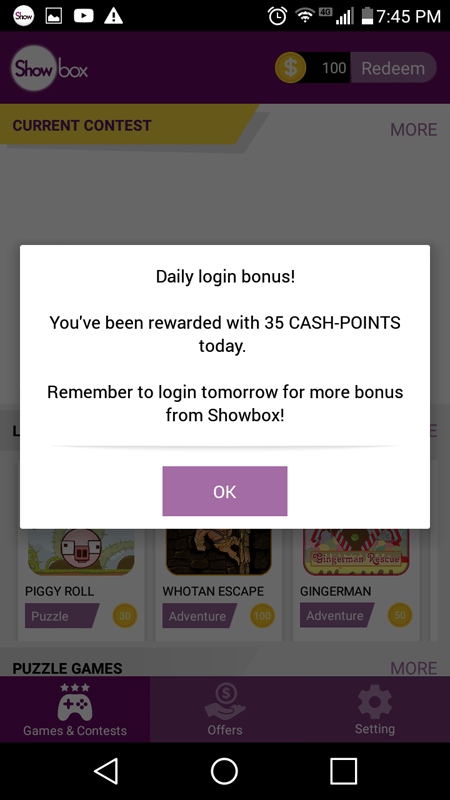 Apparently, I had been awarded 35 Cash Points for joining up… which was pretty awesome. This is what the home screen looked like when I got logged on. 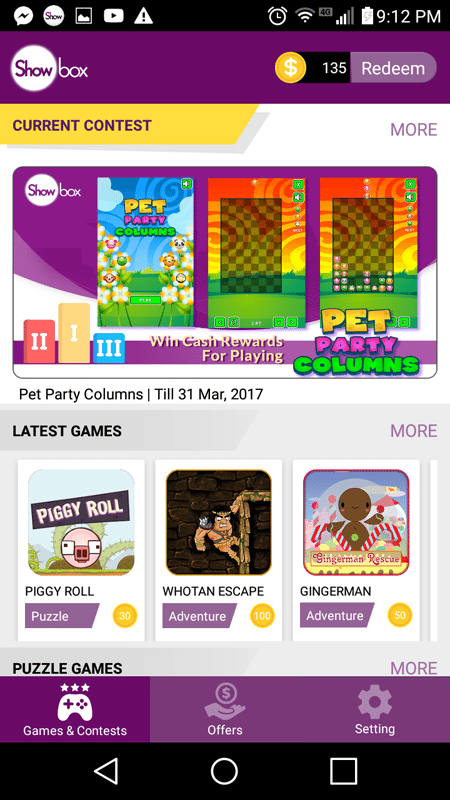 It seemed pretty simple, to be honest. At the top right corner of the screen I could see my current number of Cash Points, next to a Redeem button. Each of the games had a reward value placed on them, which seemed to average about 50 Cash Points. Some were 30, some were 50, some were 100, etc.

Next, it was time to try out one of the games, just to see how the app worked. We tried one called ‘The Sorcerer.’ It looked like a silly puzzle game of sorts… and when we tried to open it, an advertisement popped up… but we clicked past it.

Our phone asked us to rotate it to a landscape position, and when the game started up, some silly music started playing (the music was… different. It sounded like a music box. A bit strange, really. And, to be honest, it was a bit repetitive… but whatever).

There were also advertisements (like banners) along the bottom of the screen that kept rotating. The look of the game and the app at this point was, to put it simply, not very professional-looking. Cheesy banner ads and a weird gaming interface made it feel kind of… blah to us. 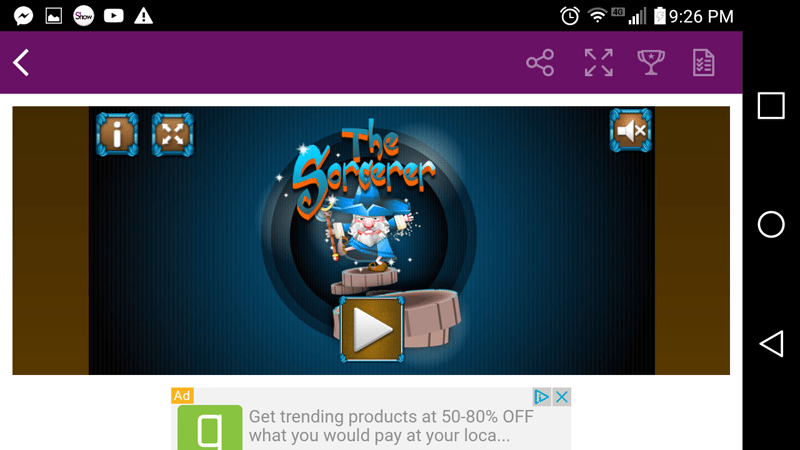 But, we pressed onward and gave it a try.

It was unclear how much of the game we had to play to earn the points… so we decided to clear a level just to see. The game felt choppy though—and it got old pretty fast. We cleared a level, but it was unclear how far we had to go to earn points.

After about two minutes, I honestly just wanted the game to be over. I decided to clear the second level and back out to see if I had earned the reward. I did back out… only to find that I had not been awarded any points for how much of the game I had played.

This disappointed me, and felt like a waste of my time. I visited the FAQ section in the settings to see if I could figure out what was going on, and why I didn’t earn points for how much of the game I had played.

I eventually figured out that every game has a set of ‘rules’ that dictate exactly how you earn the points. In the game that we played, we needed to reach a certain score to ‘earn’ the Cash Points. 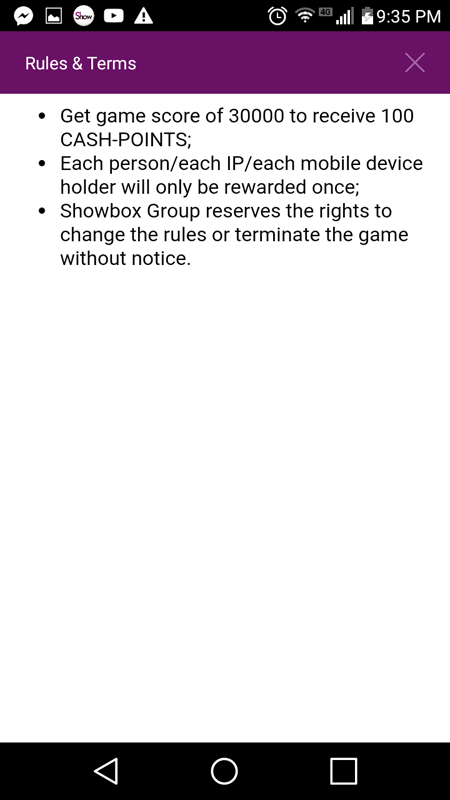 Ok, fair enough. Now that I knew this little tidbit of information, I was interested to see just how much the Cash Points were worth in real-world currency.

How Much Are Cash Points Worth In Showbox?

I clicked on the Redeem button at the top right of the screen, and found that you can redeem your points in a number of different ways. You can cash out via PayPal, get Amazon Gift Cards, Get Google Play Gift Cards, Steam Cards, Netflix Cards, etc.

But… I also found out that you needed 1,400 Cash Points just to equal $1. The game that we tried to play was worth 100 Cash Points. We would need to play a game like this (for longer than we played ours) 14 times just to qualify for $1!

Is It Worth The Time To Use Showbox?

Personally, I didn’t feel that this app as worth my time. I really like the idea of playing games and earning rewards for it, and this game did it about as well as I have ever seen it done… but there were a few things that were weird for me.

For one, the games, from what I could see, weren’t super awesome for my taste. There might be some that are, but I did quite a bit of browsing, and didn’t really find much that interested me. This made it feel tedious. Plus, I would have needed to do quite a bit of gaming to actually earn some money.

I played about 3 minutes of the game that I referenced above, but didn’t make it to the target level in points to earn the reward. By my calculation, I would have needed to play for about 5 minutes to reach it. I would then have needed to play 13 other games for a similar length of time just to earn $1.

That’s over half-an-hour of gaming, not including browsing, loading screens, and dodging ads… on games that I’m not super thrilled about, for just $1 in rewards.

The app works really well, to be fair, but the banner ads also got to me a bit. They just seemed tacky and made the app feel ‘old.’

It reminded me of browsing old free-gaming sites online back in 2005. It was not altogether a feeling that I enjoyed.

All in all, I feel that this app may appeal more to people who are very easily amused by simple internet games. I mean, if you’re bored and have nothing better to do on a long trip or commute, then it could be relatively easy, over the course of a week, to earn a $5 gift card.

If you played games a lot and did it consistently for a month, you might be able to earn $15-20… but you would need to do a lot of gaming to win that much.

And I’ll be honest—I would rather spend a bit of money to play a game I love than to get paid to waste my time playing games that I don’t even like—but that’s a personal preference. Call me a gaming snob—but I really value my screen-time when I get to use it for whatever I want… and this app certainly undermined that for me.

I just couldn’t really see myself getting into this one. It seems legitimate, decently-done, and like it could have value in some circumstances and for some people—but you are probably not going to like it unless you are just really interested in free, simple internet games… and interested enough to play them for hours for relatively small amounts of cash.

An alternative is apps that pay you to download and try out other apps (which are normally games). Examples include GrabPoints, Money Machine and App Bounty.

Our Final Thoughts About The Showbox App