There are countless ways to earn income online. Some of these are obvious and extremely well-known (like survey sites), while others are much more obscure. One of the less common options is to make money while listening to music.

This is an appealing approach for anybody who loves music and anyone interested in listening to new songs. And, surprisingly, it is actually a legitimate way to earn some money. 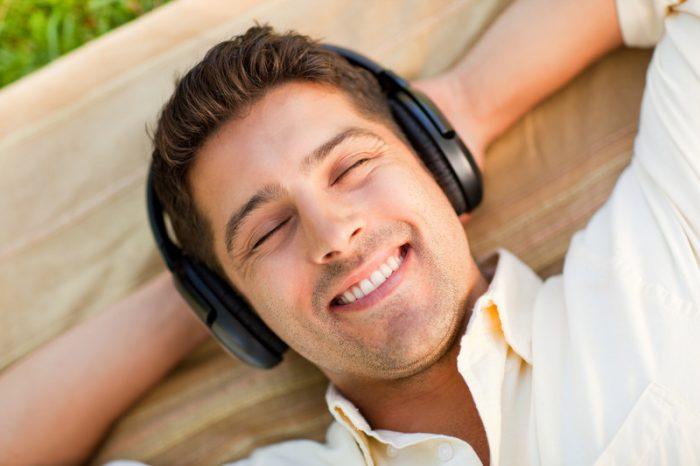 Making Money While Listening To Music

Making Money While Listening To Music

But, is the process worth the effort? This post takes a look at that question, along with various ways that you can actually earn money with music.

Music Xray is the first option that offers income for listening to music. The site is free to join and using it is fairly simple. Basically, there are four steps and you just have to listen to music to make money.

However, even the site itself suggests that you don’t get paid all that much.

Reviews for Music Xray also confirm that the pay isn’t especially great. In particular, the average is around $0.10 per song and you need $20 in credit to cash out.

Now, $0.10 per song isn’t horrible. But, it’s not just free money guys. You provide the site with information about the music you like and it matches songs to you.

So, you get emails when there is a match and you click on the link to listen to the music. This structure means that you certainly can’t earn money passively, as you actually have to click on each link.

Additionally, you may have to wait a while between emails. For example, one reviewer said that they only got a few songs per week. This is likely to vary depending on the specific genres that you select but the number of emails is always going to be fairly low. $0.50 isn’t much to earn per week.

The design also means you have to pay attention to your emails. Reviews suggest that there is a limit to how many people get paid per song. So, if you wait too long, you may lose your chance to make money from a particular email.

As far as I can tell, the site is completely legitimate and members do get paid out. Nevertheless, it could never be a major source of income. In practice, you might be able to cash out once per month or every two months.

However, some reviews suggest that it takes longer than that. Of course, the outcomes are strongly dependent on your genre selections. Still, cashing out once per month seems like the absolute best you can do and it could potentially take much longer to be able to get your money.

If you do check your emails regularly, then the site might be a good source of a little extra money. Still, you’ll never get a lot from it. 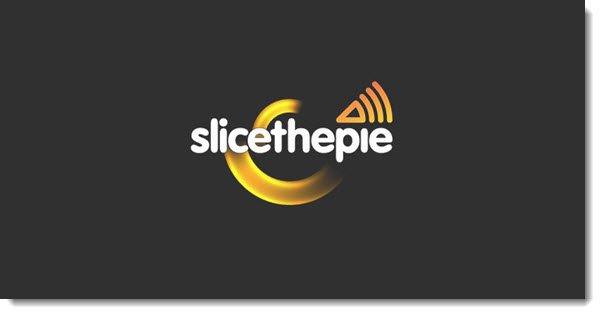 Slice the Pie is another site in the same field but there are significant differences. For one thing, you’re not just getting paid to listen to music. Instead, you have to review it too.

I’ve actually reviewed Slice the Pie before and the idea is relatively solid. But, once again, the income potential isn’t particularly high.

When I used it, I completed two reviews and earned a grand total of 9 cents per doing so. For each song, I had to listen to around 90 seconds before I was allowed to write the review.

If you calculate that out, you would be earning roughly $1.80 an hour – and that’s assuming you can review unlimited songs (which you can’t).

Now, the amount you get paid can increase as you do better with your account and have been with the company for longer. Likewise, some sites have detailed ways to make the most possible income for a review. So, the amount per review can be higher.

But, even at the high end, you’d typically earn less than $0.20 per review. That’s not much, especially as you have to listen to 90 seconds of music.

At the end of the day, you’d still be earning far under the minimum wage even if you were extremely efficient with reviews and getting decent ratings from Slice the Pie.

On a side note, you can also make money by getting other people to sign up. However, your income from doing so is 10% of what the person you refer earns from reviews.

As I already mentioned, you don’t earn much from reviewing music anyway, so the people you recruit won’t either. If you could recruit enough, the process might be worth it, but don’t hold your breath.

Once again, the end result is that you can earn money but you won’t be earning much. This site also involves a considerable amount of work for what you do earn.

Honestly, this just isn’t worth the effort. You could earn more for your time as a freelance writer than you could at Slice the Pie. Likewise, there are other ways to make money online that pay better than Slice the Pie.

Music Xray and Slice the Pie are the main choices if you want to make money by listening to music. However, there are some other sites that have a similar idea.

For example, one other site is Radio Loyalty. This one operates a little differently, as you’re basically listening to online radio. You earn some points by streaming the music and by entering a CAPTCHA every 10 minutes or so.

Theoretically, this approach has more potential than the previous two, as you’re not getting paid per song. However, the use of CAPTCHAs means that you still can’t tune out either. Radio Loyalty also seems to bog down some computers due to the ads that it uses.

There are also other ways to earn points, such as rating songs, doing surveys, or using some apps. But, the amount you get for doing so isn’t especially high either.

The idea might sound good but you just end up with something that works much like a survey site. Indeed, reviews suggest that you’re just earning $0.10 per 10 minutes for listening to music or even less.

That’s an absolutely horrible rate. Even if you were doing other tasks as well, you’re getting barely anything for your time and energy.

Honestly, the only reason for even using the site is if you enjoy listening to streaming radio. But, even then, the reliance on CAPTCHAs would get frustrating fast.

Get Paid To Review Music 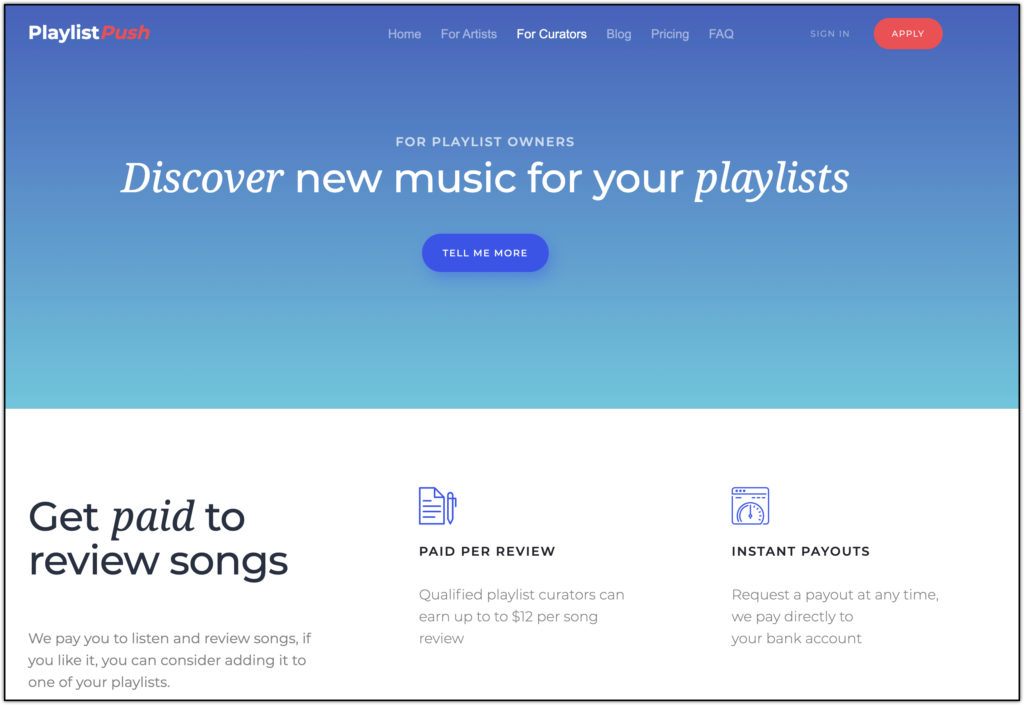 A new-ish service that’s cropped up lately is getting paid to review music. The concept is that artists want exposure to popular music playlists. For some services, it’s against the TOS to do sponsored music plays.

By using services like PlaylistPush, you can bridge the gap. You get paid to write a review, and you naturally get exposed to new music. Though you aren’t getting paid to feature artists on your list, as a quality curator of your genre, The good music you review will naturally end up on your playlist.

The Underlying Concept: You Get Paid Very Little

There are other sites out there too that have a similar idea to the three sites that I’ve mentioned. Regardless of the specific approach, the income involved is typically very little.

When it comes down to it, there’s no real way you could earn a lot of money just listening to music anyway. After all, where does that money come from?

To a degree, some artists will be willing to pay sites to increase their own music exposure. But, the amount they pay is never going to be all that much. Plus, the site you’re working for will take most of that money.

So, you’re not ever going to find a site that pays $0.50 per song or something like that. Instead, sites will offer little money and make themselves sound much better than they actually are.

An Alternative Way To Make Money Online Through Music

If you want to make significant money online, then you need to find a way that provides more value to people. Listening to music and providing an opinion is easy, and often low value, so you get paid very little.

To get paid more, you need to do something valuable. One such business model is affiliate marketing. Because we’re speaking about music, we’ll look at some examples that have to do with music. However, you could use affiliate online marketing with any topic that interests you – including music!

Basically, you start a website and write articles for the website. They can be on any topic you want (knowing what to write about is part of the research process). In the articles, you can recommend products related to the article topic.

The idea might sound strange but it works. In fact, affiliate marketing benefits all groups involved.

First, the company essentially gets cheap marketing. They only have to pay if you get them a sale. At the same time, you’re earning money and the customer is getting useful information.

There is also a lot of flexibility in affiliate marketing. You can basically promote any product as long as you can find an affiliate program for it (and there is no shortage of those programs). You also get to create a business where you’re in charge and then grow that business over time.

Make Money While Listening To Music